This is a mixed class. Graduate and undergraduate students will be graded and curved separately.

There will be two exams given during the semester. In the event of an excused absence (illness, job-related travel, holy day absence, etc.), students must inform the instructor ahead of time and provide proper documentation of the conflict. An accommodation will be attempted for verifiable problems. Homework assignments will be collected graded and discussed in class (as time permits).

Homework will be collected at the beginning of the class period when it is due. Homework that is not reasonably neat and readable, or not bound, will be marked down. Late Homework will not be accepted. It may not be returned to you until a week after it is due, which means you may not have it back for a problem-solving session, or to use in studying for an exam. If you want to have it available at these times, you will have to make a photocopy of it before you turn it in.

A robot is a reprogrammable, multifunctional manipulator designed to move material, parts, tools, or specialized devices through variable programmed motions for the performance of a variety of tasks.

Basically, a robot should be able to sense, move and act intelligently. Put difeerently, a robot should have sensors on it to enable it to be environmentally-aware. It should be equipped with mechanical parts such as electric motors to make it able to navigate its environment. Lastly, it needs some 'smarts' (otherwise referred to as reprogrammability in engineering literature) to make it intelligent. The reporgrammability aspect of the definition is very important because it gives a robot adaptibility and usefulness making the robot reconfigurable.

Robot manipulators are made up of links, \(i\), which are connected by joints, \(j_i\), to form a kinematic chain. Joints are typically rotary (henceforth referred to as revolute) or linear (henceforth referred to as prismatic) with a simple end effector for manipulating work pieces. Applications vary from simple tasks such as pick and place operations to navigating complex environments (MIT Cheetah Robot) and medical robots such as the Davinci Surgical System among others.

An example of a revolute/ joint is depicted in the figure below: 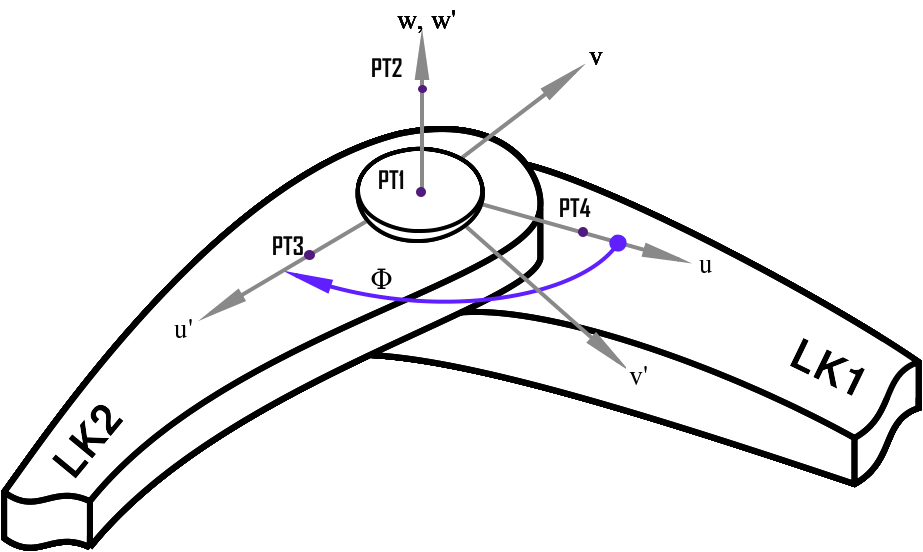 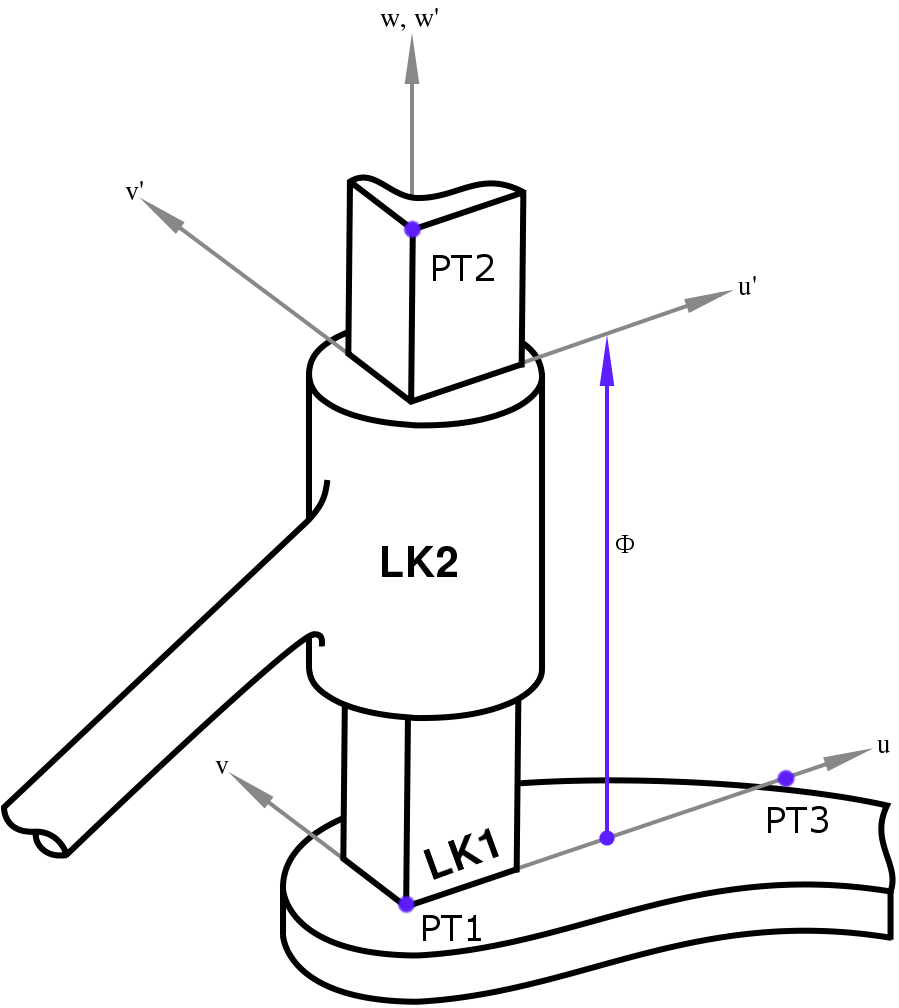 Fig. 1. An example of a revolute joint (left) and a prismatic joint (right). Courtesy, impsim.

Rotations follow the right hand rule. Essentially, this means if we have three orthonormal vectors \(x\), \(y\), and \(z\) \(\in\) \(\mathcal{R}^3\) which define a coordinate frame, they must satisfy the mathematical relation,

A three link arm with 2 revolute joints for example is referred to as an RRP arm, where the R's stand for revolute and the P stands for prismatic. An example of an RRP robotic arm is the SCARA robot which we shall deal with shortly.

Example 1: For a single revolute joint arm, the configuration space is \(\mathcal{S}^1\), which geometrically is a one-dimensional sphere (or 1-D sphere).

Example 3: For a one revolute and one prismatic joint, the configuration space is \(\mathcal{S}^1\) \(\times\) \(\mathcal{R}\) which is geometrically the equivalent of a cylinder.

The number of degrees of freedom of a robot is the minimum number of parameters required to specify the configuration of a robot. Generally, this is equivalent to the size of the configuration space. Typically, the number of joints for a robotic manipulator will tell us about how many degrees of freedom it has. The cyton arm robot which we will use in most of the labs that accompany this class has seven joints and hence seven degrees of freedom. A rigid object in three-dimensional space will have six degrees of freedom(DOF) because it will have 3 dedicated to orientation and 3 dedicated to translation. When the DOF is lesser than 6, the robot is said to be underactuated. An example of underactuated robots include quadrotors with four rotors. When a manipulator has more than 6 DOF, we say such a robot is kinematically redundant.

The state includes the geometry of all inputs, all disturbances, velocities, forces and et cetera that determine the current and future response of the manipulator.

The state space is the set of all possible states of a manipulator.

The accuracy of a manipulator is a measure of how close the manipulator can reach a specific point \(x, y, z\) in the state space. There is no absolute correct way to measure the accuracy of a robot. One method is to use position encoders in joints at known locations. This would use the assumed geometry of the manipulator and its rigidity to infer the end-effector position from the measured joint positions. It becomes apparent therefore that accuracy is affected by computational errors, machining accuracy during the manipulator construction, gear backlash among other things.

Repeatability is a measure of how close a manipulator can return to a previously taught point. The resolution of the controller will affect a manipulator's repeatability. The resolution is the smallest degree of increase in manipulator motion that a robot can sense and is the ratio of the total distance travelled and \(2^n\) where \(n\) is the number of bits of the encoder accuracy. Therefore a prismatic axis will have a greater resolution compared to a revolute joint (a straight line is shorter than an arc length).

Following the prismatic and revolute joint taxonomy, there are many possiblities in the way a manipulator arm can be designed. This section discusses the common design attributes of the typical arrangements.

This is otherwise called the anthromorphic manipulator named out of its anthropomorphic characteristics. It has three revolute joints with each axis designated as the waist (\(z_0\)), shoulder (\(z_1\)), and elbow (\(z_2\)). More often than not, the joint axis \(z_2\) will be parallel to \(z_1\) while both \(z_2\) and \(z_1\) will be perpendicular to \(z_0\). The revolute manipulator has a considerably large degree of freedom of movement in a compact space. 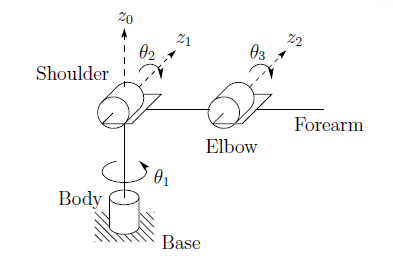 Fig 5.1. Symbolic representation of a six-DOF elbow manipulator with links and joints similar to those of a a human joint/limbs which explains why it is called an anthroppmorphic robot. Photo courtesy of [\(^2\)].

If we replace the elbow or last joint in the RRR manipulator with a prismatic joint, we would be left with what is called the spherical manipulator. Spherical joints are capable of arbitrary rotations and the name derives from the fact that the "joint coordinates coincide with the spherical coordinates of the end effector relative to a coordinate frame located at the shoulder joint"\(1\). Passive spherical joints is consists of a ball and socket joint. This does not work adequately if the joint is to exert forces and torques and hence actuated spherical joints are often constructed such that three revolute joints are combined with motors to the end of making their axes intersect at a point\(^3\).

Fig 5.2. Symbolic representation of a spherical arm (left); The Stanford Arm (right) is an example of a spherical manipulator. Photo courtesy of [\(^2\)].

Short for Selective Compliant Articulated Robot for Assembly. Introduced in 1979 in Japan and the United States. Typically used for pick and place operations. 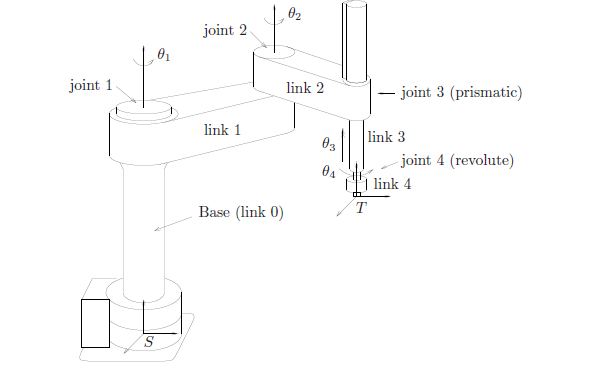 The cylindrical manipulator has two independent degrees of freedom and is typically a combination of a revolute and two prismatic joints such that their axes intersect. An example of the cylindrical joint is shown in fig 5.4.

Fig.5.4. Symbolic representation of the Cylindrical Robot. Photo Courtesy of [4].

We say a manipulator is cartesian of its first three joints are prismatic. The variables of the joints are the cartesian Cartesian coordinates with respect to the base. They find uses in sealant application to materials as in table-top assembly, as gantry robots e.g. for cargo transfer etc. Its axes are coincident to a Cartesuab coordinator

In this class, we have covered the mathematical basis of robotics and built a foundation upon which we shall build the next several modules. Please go through the material posted on elearning and chapter 1 of Dr. Spong's book [\(^2\)] to get familiarized all the more with the topics we have discussed so far.

We'll see you in the next class.